Johannesburg: The FIFA Congress on Thursday confirmed the suspension of the Football Association of Brunei Darussalam (BAFA), as proposed by the FIFA Executive Committee.

As the chances of the BAFA being re-registered in the coming weeks have improved, the FIFA Congress also gave the FIFA Executive Committee the authority to lift this suspension if the BAFA is re-registered.

The FIFA Executive Committee had earlier agreed to recommend to the FIFA Congress the suspension instead of an expulsion as previously envisaged until the 2011 FIFA Congress.

"Thus the outcome of the Fifa Congress only raises more questions than answers, what is Brunei's move and what of FFBD?

Previously if the expulsion did go through during the congress meeting in these two days, Brunei will have had to wait until at least 2012 to have any chance of playing again on the international stage.

In March, the Asian Football Confederation (AFC) explained that there were two alternatives if the Sultanate wants to remain a part of the global football community.

First option is the re-registration of Bafa by the local authorities and second, for a new body to officially apply and be recognised by Fifa.

"The application of a new body can come only after the first body has been expelled," said Regenass in an email to The Brunei Times on April 2.

"That means a new association could only expect to join Fifa and play in international competition after mid 2012," Regenass added.

If the same rules apply with the extended suspension, it would be at least in 2013 that Brunei will get a taste of international football if Bafa is still not re-registered by then."

The Brunei Times
Posted by jonny at 4:49 PM No comments:

BAFA will not be expelled !

Johannesburg: The FIFA Executive Committee decided on Monday here that the Football Association of Brunei Darussalam (BAFA) will remain suspended instead of being expelled.

This follows changes in the government of Brunei Darussalam that provide a measure of hope that BAFA could be re-registered.

the-afc.com
Posted by jonny at 7:50 AM No comments:

THE Football Federation of Brunei Darussalam (FFBD) held a cash handing over ceremony to the winners of the respective leagues in the DST Group Brunei Premier League (BPL) at the Centrepoint Hotel in Gadong yesterday.

In his welcoming speech, Dato Paduka Hj Md Hamid Hj Md Jaafar, the president of FFBD, congratulated the teams for their achievements this season.

"Congratulation to the victorious teams that will be receiving their cash prizes this evening. We have already made plans for the 2010/11 season ... and soon we hope to kick-start the Under-14 and Under-16 National Leagues," said the president.

The president then handed the prizes to the respective winners.

First and foremost was QAF FC, represented by coach Rahim Hj Daud, who received a sum of B$10,000 as the BPL I champions.

One of the most dominant forces in Brunei football, QAF FC clinched the title with a 2-0 victory over AH United on Feb 16 with one match left in the season.

BPL I runners-up and FA Cup champions, the Royal Armed Forces' Sports Council (MS ABDB), received B$7,000 and B$3,000 respectively for their achievements.

MS ABDB beat arch-rivals QAF FC 2-1 at the Hassanal Bolkiah National Stadium on April 17, stopping them from being the first team to capture a quadruple after having secured the Champions Cup, BPL I title and the DST Group League Cup.

Undefeated champions, LLRC FT, were awarded a sum of B$5,000 which should be helpful for their venture into the BPL I next season.

Second place Prisons Department received B$3,000. They will join LLRC FT in the top flight next season, having crushed BPL I bottom dwellers NBT FC 5-1 in the play-off on April 21.

Temburong-based P Lun Bawang got B$2,000 for placing third.

The Brunei Times
Posted by jonny at 12:06 AM No comments: 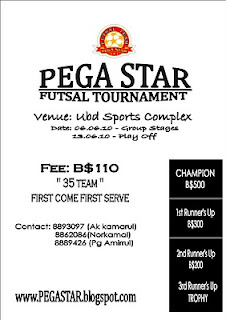