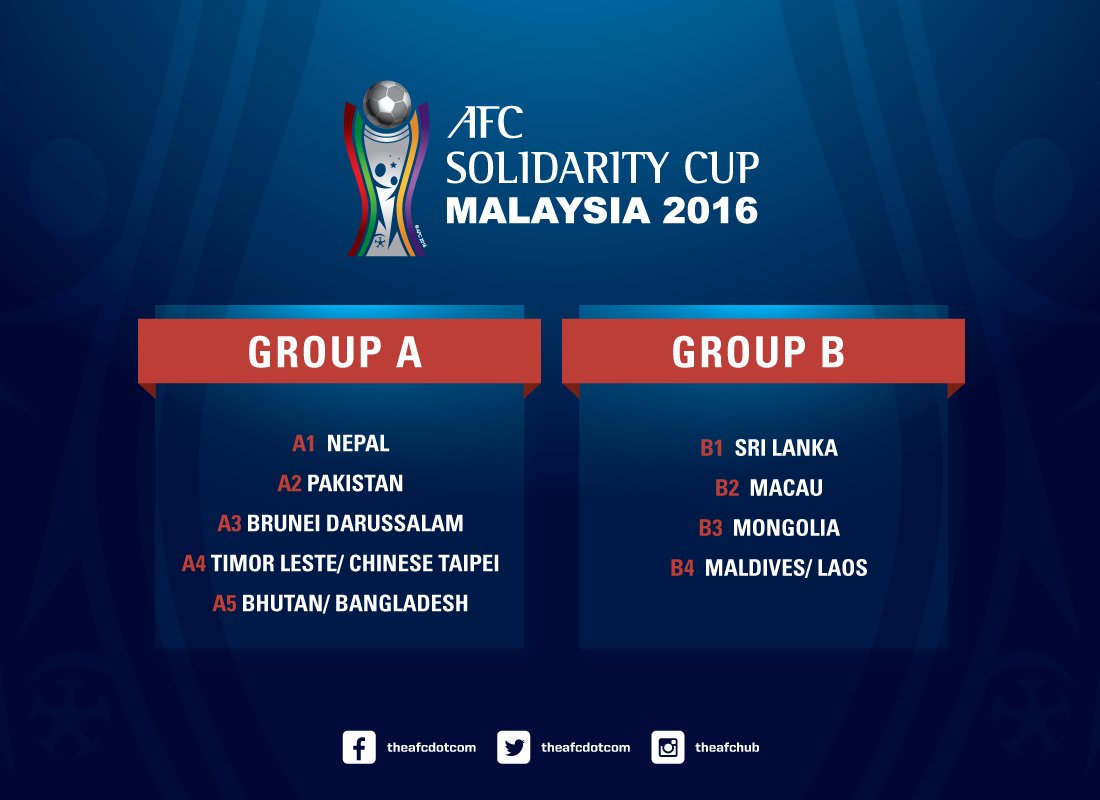 Kuala Lumpur: The official draw for the inaugural edition of the AFC Solidarity Cup took place on Thursday at AFC House in the Malaysian capital.
A total of eight or nine teams will participate in the AFC Solidarity Cup Malaysia 2016 – six of them being Brunei Darussalam, Macau, Mongolia, Nepal, Pakistan and Sri Lanka – who were all eliminated from the 2018 FIFA World Cup and 2019 AFC Asian Cup Preliminary Joint Qualification Round 1. Two or three teams – Laos or the Maldives, Chinese Taipei or Timor-Leste and Bangladesh – who will be eliminated from the 2019 AFC Asian Cup Qualifiers Play-off 2, will also participate. These will be decided after the completion of Play-off 2 on October 11.
The pairings for the currently ongoing 2019 AFC Asian Cup Qualifiers Play-off 2 are: Pairing 1: Maldives v Laos - Pairing 2: Bangladesh v Bhutan - Pairing 3: Timor-Leste v Chinese Taipei
However, if Bhutan are the losing team in the pairing above, only losers from Pairings 1 and 3 will take part in the AFC Solidarity Cup, as Bhutan have not expressed interest to participate.
OPTION 1: EIGHT PARTICIPATING TEAMS
If Bhutan are the losing team in Pairing 2, there will be eight teams taking part – six from the Preliminary Joint Qualification Round 1 and two from the AFC Asian Cup Qualifiers Play-off 2. There will be two centralised groups of four teams and the winner and runner-up (total four teams) will advance to the semi-finals. The two winners in the semi-finals will battle it out in the final match.
OPTION 2: NINE PARTICIPATING TEAMS
If Bhutan are not the losing team in Pairing 2, three teams from the AFC Asian Cup Qualifiers Play-off 2 and six from the Preliminary Joint Qualification Round 1 will form the competition. The teams will be drawn into two groups (of four and five teams), and the two group winners will play in the final.
DRAW SEEDINGS
Teams from Preliminary Joint Qualification Round 1 were seeded based on the last FIFA Rankings released on August 11 and will be drawn from the following pots: Pot 1: Nepal (seeded 1st), Sri Lanka (seeded 2nd) - Pot 2: Pakistan (seeded 3rd), Macau (seeded 4th) - Pot 3: Brunei Darussalam (seeded 5th), Mongolia (seeded 6th)
There will be no rankings for the teams from the AFC Asian Cup Qualifiers Playoff 2 and they will be seeded into a single pot, Pot 4.
THE DRAW
Group A: Teams Nepal, Pakistan, Brunei Darussalam, Timor-Leste / Chinese Taipei, Bangladesh / Bhutan
Group B: Teams Sri Lanka, Macau, Mongolia, Maldives / Laos
The new competition will kick off on November 2 with the final set to take place on November 15.