DPMM FC passed a tricky test in the Brunei Super League after a 2-0 victory against Kasuka FC at the Jerudong Park Mini Stadium last night.

Goals from Hanif Farhan and Andrei Varankou secured a sixth straight win for the league leaders in the Brunei top flight.

The Gegar-Gegar men welcomed the return of forward Azizi Ali Rahman into the team since being sidelined by injury which he sustained in the league opener against Bakes FC.

The battle between the league’s top two sides also saw an end to Kasuka’s unbeaten record, who were enjoying a run of five straight wins.

The afternoon matches saw MS ABDB continue their unbeaten start after a narrow 2-1 victory against basement dwellers Jerudong FC at the 3rd Battalion, Lumut Camp Field in an afternoon kick-off.

Forward Hariz Danial and substitute Baharin Hamidon grabbed second-half goals to condemn the Jerudong side to a fifth straight defeat this term.

Elsewhere at the Berakas Sports Complex, BSRC FC picked their third win of the season after defeating Setia Perdana 3-1.

Halim Shawaluddin opened the scoring for the Belait-based side in the 33rd minute before Safuan Juhar doubled the lead in the 64th minute.

Rimba Star will continue their search for an elusive first victory after slipping to a 2-1 loss to KB FC at the Arena Field in Seria.

Azim Boll Hassan inspired his team with a brace in either side of the half while Daniel Ariffin was on target for Rimba Star. 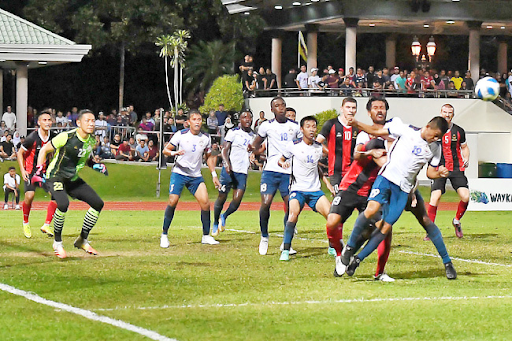